Stranger Days on Peculiar Hill: An interview with Grimly Darkwood

Stranger Days on Peculiar Hill: An interview with Grimly Darkwood

We are thrilled to welcome the mysterious Grimly Darkwood into The Reading Realm to talk about his brand-new book, Stranger Days on Peculiar Hill, the exciting sequel to The Shop on Peculiar Hill…

Both books concern Peter and Amanda and their quest to rescue a missing person. In the first book, it’s the small boy Algernon and in the second it’s Augustus Flipper, the hapless explorer who is also the father of their new companion, Mala. In both books, there are all sorts of monsters, dangerous plants, and other obstacles to overcome, but in this new one the stakes are very much higher. It turns out not to be just the life of Augustus Flipper that’s under threat but the balance of the ‘weirdosphere’ and the future of the Vale of Strange itself.

How did you feel about returning to the Vale of Strange? Nervous? Excited?

I felt both of those, which is lucky really. If you’re nervous and excited then you’re on the alert, which is what you need when you’re in the Vale of Strange or you won’t stay alive very long.

It’s great to see Peter and Amanda joined in their new adventure by Mala. What do you feel she brings to the story?

Mala was originally going to be a serious character, in contrast to Amanda the practical joker. But when I started writing Stranger Days, I found that Amanda had changed. She had learnt from the awful mistake she had made in the first book, putting Algernon in so much danger, and become rather more sensible. So to contrast with her, I now had to make Mala a bit of a joker herself. She isn’t a practical joker like Amanda but she has a wacky sense of humour, which is typified by her silly ‘undercover apple’ joke. You are never quite sure what she is going to come up with next. You can’t imagine either Peter or Amanda reading bedtime poetry to a bogey, for instance, but that is what Mala does.

At the same time, Mala also has a serious side, and there is no doubt that Amanda sees her as a rival. I was amused when one reader described the relationship between Peter and Amanda in the first book as ‘the love interest’ because I thought they were a bit young for romance, but however you view it, Mala and Amanda are certainly rivals for the friendship and/or affection of Peter. Not only that, but Amanda sees herself as the resident expert on the Vale of Strange and advisor-in-chief to Peter so she is certainly phased when wacky Mala makes sensible suggestions from time to time.

In view of all this, it’s scarcely surprising the two of them argue when they get together. I’d always intended that this would happen but it turned out to be something I didn’t have to work very hard at to get them to do. As soon as they met, they went at each other with hammer and tongs. I just had to sit back and let them get on with it, leaving poor old Peter attempting in vain to keep the peace. I hope the readers find the end result as entertaining as I do.

Of course, they have the good sense to make up in the end and perhaps come to some sort of understanding of where they’re both coming from. Though I’m not entirely sure how long it will last…

As well as Mala, there are lots of wonderful new characters in the book. Do you have a favourite?

That would be Sudslifkin. I love lifkins in general, but I always like it when a character makes an appearance in a minor part and I’m expecting we’ll never see them again but then through sheer force of personality they manage to carve themselves out a substantial role in the book. This happened with Suds. He was only ever intended to appear down in the tunnel, scratching his head at the sight of three children stuck in his vacuum cleaner. But then as the book progressed, he kept turning up again and again, always with some important part to play. He really does give value for money (so make sure you get in touch with him if your carpet needs cleaning).

I was intrigued by some of the events and themes in the story – people in power lying, a crazed leader, the production and selling of weapons of mass destruction, children working together to protect their home – and wondered if any current world events might have influenced you?

The books are primarily intended to entertain, yet the state of the world hangs heavily on me these days, not least because my generation, who are now embarking on our retirement, seem to have made such a mess of it. I suspect that at the moment whatever I might write, whether for children or adults, would be influenced by this unfortunate situation.

So the answer to your question is certainly ‘yes’. I’ll try to explain why.

When I was a child, I got the impression that the adults who ran the world knew what they were doing. They might make a mess of things from time to time and have to fight the odd world war, but these were just blips in the orderly business of keeping things ticking over. It is only in recent years I’ve come to realise that this isn’t true at all: the people in charge don’t really know what they’re doing, they’re making it up as they go along. What’s more, the most dreadful things are done as a matter of routine and no one does anything to stop them, things like the way the tourists are treated at the Vale of Strange for instance. The truth is the world isn’t run properly at all. It’s run very improperly. If things are ever run right, it’s more by accident than anything.

Now I know that not everyone reading this will agree with what I’ve just said and they may think it’s not a suitable issue to raise in a children’s book anyway. But the example of the environmental activist Greta Thunberg has shown that children can possess a more rational perspective on the state of the world than adults do, that children can show us all the way forward. So if I can do my small bit to encourage children to think about what’s happening in the world now, rather than do what I did and work it out – very slowly – as an adult, then it might at least buy us a bit more time. The world is in need of a much more astute generation than we ever were. The least we can do, having made such a mess, is encourage them not to make the same mistakes all over again.

So when Amanda says in Stranger Days that we should take notes of the promises our leaders make and make sure they know about it if they don’t come up with the goods, I’m hoping that’s an idea my readers will take to heart or at least bear in mind for the future. They need to ensure that the world is run more responsibly than it ever was in our time.

What I also liked about the book is that it gallops along at a break-neck speed! What did you have to edit out of this book and how did you ensure the thrills kept coming?

In terms of pace, I did two main bits of editing. The first draft of the early chapters had Peter wandering back and forth to the big old house for no very obvious reason so I introduced a new ingredient to make things fizz along better. I don’t want to spoil things for anyone who hasn’t yet read the book so I won’t say exactly what this ingredient was except that it had to do with Uncle Bob and the Australians. Then later on there was a section where Peter and Amanda were trying to rescue Mala who had crash landed into one of the coloured bubbles. When they found her, they discovered that there now seemed to be two Malas, and Amanda worked out that one of them was the real Mala while the other one was a monster in disguise. They had to try to decide which of them was which without being eaten by the monster. This was actually one of my favourite parts of Stranger Days but the original version of the book was a bit too long so something had come out and that was the only bit I could remove without affecting anything else.

Do you have any plans for a third book in the series and any ideas about what might happen?

I’m not sure yet. My contract was only for two books and a lot of things were resolved at the end of Stranger Days so I could just leave it there. But even so, we’ve described the books as ‘a series’ which does kind of suggest there’ll be more than two. And somehow or other when it comes to books, three is a nice round number (even though it’s odd) whereas two seems rather odd (even though it’s even) if you see what I mean.

So maybe I’ll do another book. There’s still a lot to write about. We found out at the end of Stranger Days that there’s going to be a lot of changes in the Vale of Strange, and putting them into practice might not be easy, especially if humans and lifkins have different ideas about how it should be done. Then there’s the ghosts. They were mentioned briefly in the first two books but were never actually seen, so I think it’s about time they put in an appearance (so to speak). So the third book might be spookier than the previous two. Something else to bear in mind is that the summer holidays are finally coming to an end by the close of Stranger Days, so it’s time for Peter and his friends to go to school. What would a strange school be like, do you think? I wonder if it is haunted? And I’d really like to find a place to insert the bit I had to cut out of Stranger Days about the twin versions of Mala. It would be a shame to let that go to waste…

Finally, can you describe ‘Stranger Days on Peculiar Hill’ in three words?

It has to be the obvious answer. Even – More – Strange.

Many thanks for the chance to talk about it! 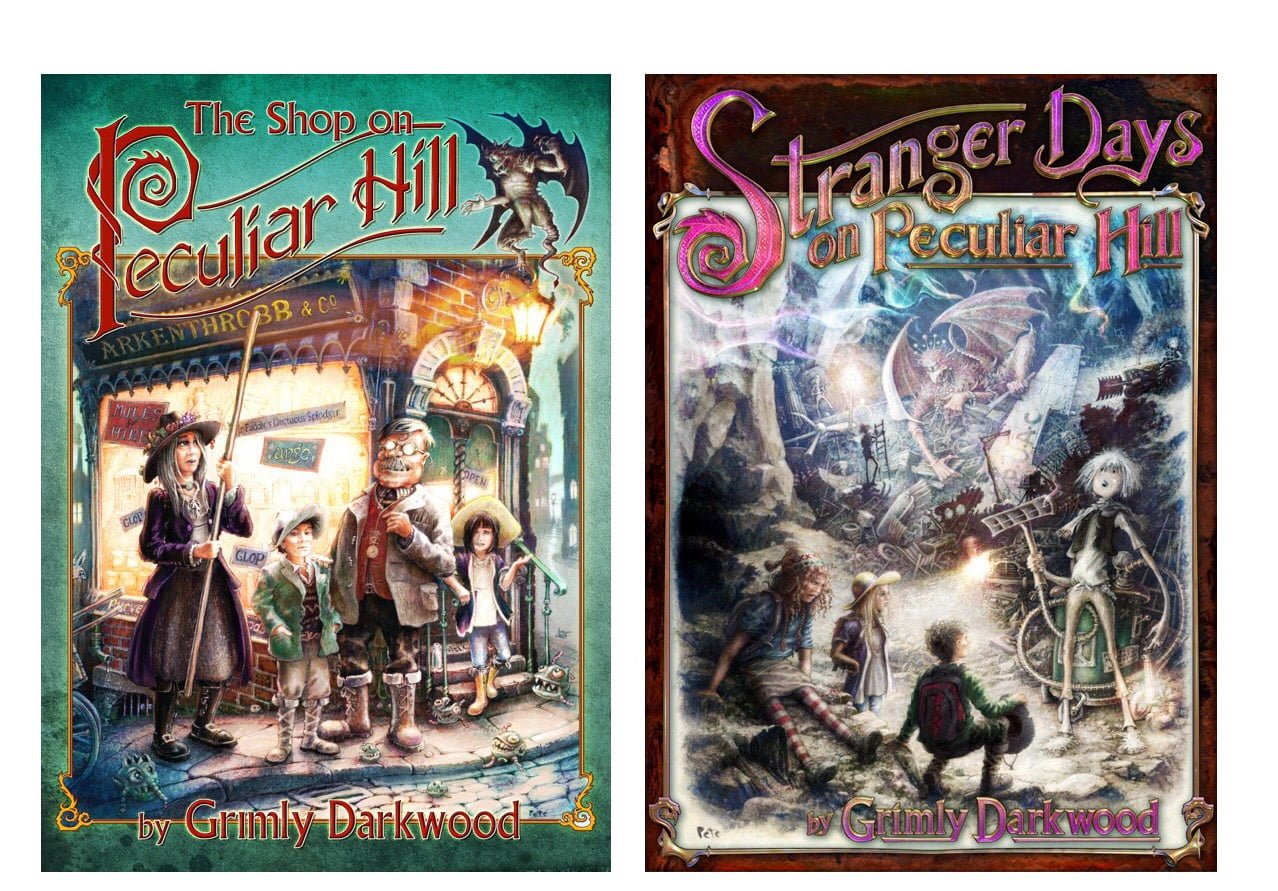