Wranglestone: An interview with Darren Charlton

Wranglestone: An interview with Darren Charlton

We are thrilled to be part of the #Wranglestone Blog Tour! Today we talk to author Darren Charlton about his icy, scary new YA book called Wranglestone, which is set in the American wilderness and features zombies, terrifying adventure and a romance that will melt your heart…

Without giving too much away, can you tell us a bit about your new book Wranglestone?

Well, following a zombie apocalypse fifteen years before events in the book, the Escape Program gave the surviving population of America refuge inside the National Parks. The island homes of Lake Wranglestone are safe, until winter when the Dead can cross the ice. That’s the hook. Our protagonist Peter, bit of a homebody, is sent out onto the mainland with wrangler, Cooper, to herd the Dead from the shores. And there’s romance, adventure and some horror. But just like life, when you first step into a more complicated adult world, I think it’s fair to say that the story spins on a dime. That’s all I’ll say.

The setting very much reminded me of my honeymoon to Canada and the beautiful, icy, mountainous scenery I saw. What was your inspiration for the setting?

Yea, America for sure. My partner and I took two road trips, camping and hiking the national parks out there with a friend back in 2007 and 2010. I didn’t write before that. I’d had a duff acting ‘career’ way back in my 20’s and by this point was trying to 9-5 it. But seeing the world on that scale, the planet really, woke me to the fact that I still needed to be a creative person. Looking back now, it seems so inevitable that Wranglestone has become my first book. It’s such a mash up of my stuff; the wilderness as a place of transformation, being gay, genre cinema, log cabins and canoes etc. All the stuff I love. But, of course, there were stories before this one that ended up in the bin of doom. Any writer reading this will know it takes time to find out what your lane is and know to follow it.

The front cover design by Jana Heidersdorf is stunning and captures the spooky, icy feel of Wranglestone perfectly. Can you remember how you felt when you saw it for the first time?

Well, first of all I must credit the book’s designer Pip Johnson for the cover concept. But yes, Jana’s done such a beautiful job. It was really important to me that the cover play against any expectations a ‘zombie novel’ may carry because really, they’re a gateway into another story which has a mystery and a romance and then has a bit of a sci-fi as social allegory thing going on. So, what Jana’s done cleverly serves both the book it starts out as being and the one it becomes. I just love covers you can keep returning to. The book also looks like my style feels, I think. And, to answer your question, yes, seeing the cover on the physical book in particular was wonderful. The way the painting is matte finish just looked so smart and special. It looks like it was made with love, and across all departments, it really was. I’m very fortunate.

It’s wonderful to see the relationship between Peter and Cooper develop throughout the story as they fall in love. I was saddened to read that there has been ‘a spate of attempts around the world to remove titles depicting gay or transgender characters from library shelves’ (The Guardian, January 2019). Why do you think YA books that explore the lives of gay and transgender characters and present a variety of relationships are still so important?

Well, because progress is fragile. And can be undone. Our times couldn’t tell us that any more than they do right now. So, we have to keep watch. But representation in Children’s books is vital. LGBTQ+ kids exist. End of. They’re not conditioned or groomed. And it’s an entirely adult judgement value that being any spectrum of different is something a child should be shielded from. We pass that stuff down to them time and time again. Adults I mean. Look, my book isn’t going to make someone gay any more than Wuthering Heights managed to make me straight. But it might tell a gay kid they’re OK, and that they will have their own story. Aside from being (I hope) a cracking yarn, that’s what Wranglestone’s here for.

Oh, thank you. It’s still so new to me finding out that stuff works. There’s an extended scene towards the end that goes on forever. Hitchcock’s rule of suspense was to let the viewer know something’s awry, then let them sweat waiting for it. I love that! I gave it a go. Overall though, there’s a midway turning point in the story that, no matter how hard I tried, couldn’t get woven in any sooner. I just hadn’t spent enough time with the characters to land it. Problem is, that’s left a fair bit of world building before the actual plot kicks in. So, I knew going in that structurally the second half of the book had to reward those readers waiting for plot and action, who weren’t digging the scene setting and romance stuff so much (hello Mum) with some pay off. I’ve tried my best to balance both.

There’s a lot in the story about fear of outsiders and the demonisation of other people who are different and I wondered if this was a reflection of, or commentary on, the state of our society today?

Completely it is. An Island community scared of monsters on the shore who want to get to them? Helloo Brexit. But that was way back in 2016 when I was drafting. The great thing about genre, particularly science fiction I think, is that you can make a story allegorical so it doesn’t date or come off as issue based. That’s the hope, anyhow.

There’s some stunning, lyrical language in the story, especially when you describe the frost and snow, and there’s a wonderful line that’s stayed with me too – ‘The cabin was as quiet as a box of secrets’. Do these striking images come to you naturally or do you have to spend a lot of time working on your sentence construction?

Thank you. That means a lot to me. And thanks for asking me about language. I don’t get asked about it all that much. It’s tricky, I think I have a pretty sound ear for rhythm and the beat of a sentence. I know when it doesn’t scan and that stuff really matters to me. But I can agonise finding those little details about a pine cone or snowflake so they ring true. One of my favourites is when Peter and his dad take the canoe out across the lake at night –

“The canoe cut a trail through a carpet of stars, making them quiver then reform as the black water stilled behind them.”

That came last minute, just before it went to print for proof copies. So, no, for someone who’s desperate to convey nature, I hate to say it but that stuff doesn’t always come easily at all. They’re the jewels I pray for.

I was left with so many unanswered questions and am desperate to dive back into the world of Wranglestone! What’s in store next for Peter and Cooper? Can you give us any clues?

Well, I’m not sure I can say much without giving things away, but yea I’m busy writing a concluding sequel. It picks up a month after events on the lake and goes on to explore those story elements we’d arrived at come the end of the first book. But I will say that it does concern the Dead. I’m not a fan of zombies being reneged as backdrop to survival stories. They should be the story. Why a spectre of humankind came to stalk the Earth is so ripe for exploring. I don’t shy from that.

Finally, can you describe Wranglestone in three words?

No! Ian, what are you trying to do to me? Elevator pitches are bad enough. Err, ‘Follow the snowflake?’ 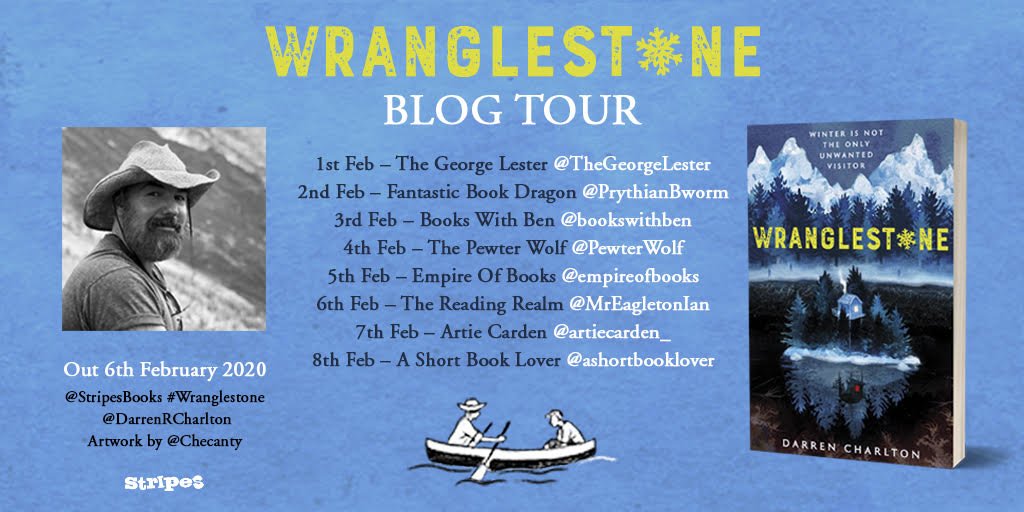