The Shop on Peculiar Hill: An interview with Grimly Darkwood

The Shop on Peculiar Hill: An interview with Grimly Darkwood

We are thrilled to have Grimly Darkwood in The Reading Realm today talking about his entertaining, quirky fantasy adventure The Shop on Peculiar Hill!

Without giving too much away, can you tell us about your book The Shop on Peculiar Hill?

The book is about a boy called Peter who comes to live with his aunt and uncle at their shop on Peculiar Hill after his parents are kidnapped by pirates and eaten by tigers. He soon finds out he is living in a place where people have to wear hats and sturdy boots to protect themselves against flying bogeys and sharp-toothed heeble-greebs and the other fierce creatures which live in the nearby Vale of Strange. When he discovers the dark secret which lies at the heart of his new home, Peter sets out to change things for the better. The trouble is he enlists the help of his new friend Amanda. He could not have guessed what a dreadful mistake this will turn out to be.

In writing The Shop on Peculiar Hill, I wanted to produce a book that was funny as well as scary, mysterious as well as exciting, and fun for adults to read as well as for children. I hope readers will think I’ve succeeded.

The story begins with Peter being sent by the Overseers of Children to live with his aunt and uncle. I imagined the Overseers to be some terrifying organisation of stern-faced people in suits. Who or what inspired them?

The book takes place in a time that is very like the 1950s and 1960s which was when I was a boy. In those days, just about everything was run by terrifying organisations of stern-faced men in dark suits. Everything was dowdy and dull. You could buy a car in any colour, as long as it was black. I don’t know much about the Overseers of Children. They just came into my head for long enough to make themselves known and pronounce on Peter’s case and then they disappeared again. I think I’m happy to keep it that way.

I loved Amanda Chubb – what a wonderful character! Sassy, funny, sometimes cruel and very mischievous! Was she a fun character to create and, write?

I love Amanda Chubb too. I don’t feel I ‘created’ her, though, and I don’t feel that way about the Vale of Strange in general. It was more like I just sort of opened a door in my mind and went in and there it all was. Certainly, in the early days, all I had to do was listen. I didn’t really know what Amanda was like until she appeared, introduced herself, and started giving Peter a hard time. But that was the moment I knew that the Shop on Peculiar Hill was really going to happen. Until then, I’d been listening to Peter and Uncle Bob and Aunt Maggie talking and that had been very entertaining but I didn’t really know if it was going to become a proper book or just end up as a few scrawled notes in the back of a writing pad. When Amanda reached out and grabbed hold of Peter and led him into the Strange Hotel, that was when I knew she was going to be there for me too, and would take my hand and lead me through to the end of the book.

The story had a wonderfully nostalgic feel to it – it reminded me of Rebecca’s World by Terry Nation – but with some very modern, up-to-date references too. How did you balance the two?

I wasn’t aware of that book by Terry Nation, though he was very much part of the 1960s of course, the inventor of the Daleks and Doomwatch, which we all watched on the BBC every week, at a time when environmental disaster seemed more like a source of entertainment than a genuine threat to our existence. The Shop on Peculiar Hill is very much set in the same time period but it’s not the same past as our past, so l like to tell myself that any little discrepancies don’t really matter. Even so, I’d like to know what these up-to-date references are that you mention! They’ve probably slipped in by mistake. By the time of the second book, which will be coming out later this year, the gate between the time zones will have been well and truly been breached however. The new book will have lots of references to the balance of the weirdosphere, for instance, the ‘strange’ equivalent of global warming, and there’s even a smartphone. When you switch it on, a notice comes up to warn you that the service might be slow because it hasn’t been invented yet. Have I got the balance right? Goodness knows. I would say that I’ve probably got it right as long as people keep reading.

I wondered if Terry Pratchett has been an influence at all in your writing? Lots of the witty, funny humour in the book reminded me of his style! Who else has influenced you as a writer?

Terry Pratchett is a bit of a problem for writers of humorous fantasy. He is so brilliant and his influence is so all-pervasive that he can take you over entirely. When I first read him, I went back and ‘improved’ a partially written book of mine, only to discover a few weeks later when I went back to it that I’d turned my book into a Terry Pratchett book. This can happen all too easily, so to be honest, if you’re writing humorous fantasy, it’s probably best not to read Pratchett. Which is a bit of a shame for us really, because he’s so brilliant and so enjoyable. Even now, of course, bits of him creep in, like the smartphone I described above for instance. I should really go back and change that now I think about it, but sometimes you just have to go with the flow.

As for other influences, the principal one for the Vale of Strange books was Philip Ardagh. My nephew was enjoying his Eddie Dickens books and brought one to show me. I read the bit at the start about how Eddie’s parents caught ‘some awful disease that made them turn yellow, go crinkly round the edges, and smell of old hot water bottles’ and I thought “gosh wow, that’s amazing! I’d like to write like that!” And that’s how I came to write The Shop on Peculiar Hill the way I did. I’m not sure if I really write like Philip Ardagh but that’s where the inspiration came from and I’d be very glad if I did. He’s brilliant. 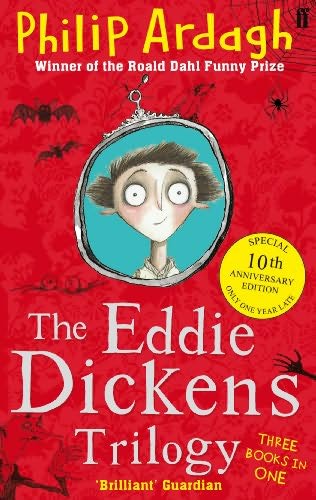 Lots of the story takes place in the spooky Vale of the Strange. Is this based on a real place or is it entirely fictional?

The Vale of Strange is another thing that was just waiting for me through that door in my brain. I knew that the bogeys and heeble-greebs and other strange creatures which terrorised the humans on Peculiar Hill had to come from somewhere and that is where it turned out to be. I don’t know of any place like it in the real world. If you do, let me know and I’ll make sure I stay away. Unlike the kids in my books, I’m not very brave.

Can you remember how you felt when you saw the cover illustration for The Shop on Peculiar Hill by Pete Lyon for the first time?

I’ve known Pete Lyon for many years and he’s produced lots of artwork for me so he was always going to be the first person I asked to do that cover. On this occasion, for the first time, it took us a while to get aligned on exactly what we wanted, so when Pete eventually produced what he did, which was exactly what I wanted but many times better than I could reasonably have expected, I was totally blown away.

I love the way he’s worked so many little details into the illustration, like the bogey in the sky in the far distance, the mysterious pair of eyes peeping out of the cellar, and even a glimpse of one of the mules at the edge of the picture. From the steely expressions on their faces, both Peter and Amanda look like a force to be reckoned with, which of course they would have to be to achieve what they do in the book. With her hat and her pole, Aunt Maggie is fully prepared against bogeys, while Uncle Bob is typically hatless and relaxed, aware that it’s not July till a week on Tuesday.

Most of all, though, I love the shop itself. The golden glow from the light inside is so welcoming and warms up the whole illustration, but the signs on the windows suggest that not everything for sale inside may be quite so reassuring. What exactly are unge and glop for instance, and what are they used for, and what are you supposed to do with unctuous splodger? And for that matter, what are we going to do about that infestation of heeble-greebs all over the pavement? There’s just so much to look at in that small drawing. It’s like the whole of the book is in that cover. It’s wonderful.

I’m desperately hoping there’s going to be a sequel to The Shop on Peculiar Hill! Please tell me there’s a new adventure planned for Amanda and Peter?

I’m really glad to hear that you are looking forward to another book. So I’m pleased to announce that I delivered ‘Stranger Days on Peculiar Hill’, the second book in the Vale of Strange series, to my publisher just a few days ago. I’m hoping it will be out in December. It will feature Peter and Amanda from the first book, of course; Uncle Bob and Aunt Maggie are back; and so is Thinglifkin who is still annoyed about the deal he did for his horn. Additionally, there is a girl called Mala who is new to Peculiar Hill; Mala’s father, the absent-minded explorer Augustus Flipper; and Mala’s evil uncle Percival Crow. There are also numerous new lifkins, a troll, and a giant-sized bogey. Don’t be surprised if the story involves a trip to the Vale of Strange.

Finally, can you describe The Shop on Peculiar Hill in three words?

Thanks for the opportunity to talk about my books – and especially for including The Shop on Peculiar Hill in your exciting Reading Realm project.