Karen McCombie has written a gazillion books (nearly!) including The Pearl in the Attic, the St. Grizzle’s School for Girls series and The Lost Diary of Sami Star. She joins us today for a chat with the lovely Tom Brassington about Little Bird Flies, published by Nosy Crow…

The majority of Little Bird Flies is set on Tornish, a fictional Scottish isle. Growing up in Scotland, was Tornish based on anywhere in particular?

I’ve lived in London for years now but if I close my eyes and think of Scotland, the first thing that comes to mind are the colours of the countryside; green firs, mauve heather, yellow broom… Some authors use a soundtrack to inform their story, but mine was that palette! Then I overlaid that image onto an island our friends lived on off the west coast of Scotland. I only visited Ulva once, but it really stuck in my mind; the beauty and the isolation. From this, Tornish began to evolve…

The descriptions of the Scottish Highlands are stunning and the relationships in the book so central; both equally believable. Do you enjoy composing the description or the dialogue more?

I love switching between the mood of description and the immediacy of dialogue. It’s like my writing career – I find it a breath of fresh air swapping from historical to funny, writing for different age groups, writing longer books or inclusive short-reads. Vive la differénce! Or maybe I’m just a fidget!

The book centres around Bridie, or Little Bird as she is affectionately known by those who care for her most. She is 12 years old. Were you anything like Little Bird when you were 12?

When Little Bird is restless, she climbs to the top of the Glas Crags and stares off and away from the island, wishing she could fly off and find out what lies beyond. I think I did the same, only my vantage point was the 15th floor of a multi-storey block, staring out of my bedroom window at the steel-grey North Sea, dotted with oil rigs…

Little Bird states early on in the book, ‘It’s not the future I would choose for myself.’ She’s determined, a dreamer and a feminist. How important was it to have such a young and strong female protagonist in your book?

My mum was in my mind a lot when I wrote this book. She was so smart and sharp, but grew up in a very poor family. She had such hopes and dreams which had to be shelved, and I always wonder what she could have accomplished if she’d had opportunities when she was young. I’m just so aware that historically, there was such a waste of talent amongst working class people – especially girls and women. Little Bird Flies is my chance to give one such girl a voice!

The theme of class is prevalent throughout the novel. Despite the novel being set in the 1800’s, do you think similar parallels can still be drawn to our society today?

Absolutely. At the time I wrote Little Bird Flies, I was purely thinking of writing a love letter to my home country, and it was only when it was finished that I recognized the themes of class and power in the novel – and how that still plays out in the UK, despite how far we’ve come as a society, sadly. 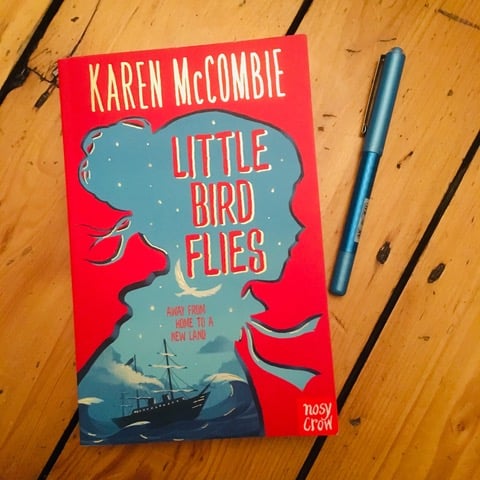 Little Bird is at the heart of the book. She was born with a physical disability, but doesn’t let it define her. And so many young people have things that hold them back or trip them up, whether that’s emotional, environmental or physical reasons. I’d love to get the message out to young people that those elements are just a part of your story, they don’t define you.

Being set in the 19th century, the novel abandons the technology and modern pop culture references that lots of children’s books currently rely on to seem relevant yet I didn’t miss any of it at all. Why did you choose this particular point in history to write about?

Little Bird Flies is about family, adventure, jeopardy and longing. Those themes will hopefully always engage readers, whether they’re set in Roman times or a high-tech near future! As for my particular choice of historical time period, using the Highland Clearances as a backdrop was a no-brainer. Over the course of a century, an estimated half-a-million poor families were forcibly removed from the Highlands and Islands of Scotland by greedy landlords, yet ­– ­despite it being a shocking event in British history, AND the reason there’s such a Scottish diaspora around the world – it’s not at all well known. It was a privilege to shine a light on this issue.

Having moved from Scotland to the big city (London) yourself, where do you call home now?

Technically, home is London, especially as I have an English daughter! But I get up to Scotland when I can, and am happy to call both places home in their different ways!

What do you hope young people will get from reading Little Bird Flies?

As well as some of the points already mentioned, I’m hoping that readers might have a lightbulb moment and recognize the themes of home and hope, emigration and persecution that they’re hearing about in connection with the present day refugee situation. History is not something lost in the fog of the past; it’s just as relevant as the here and now!

What can we expect from the next part of the adventure in the sequel Little Bird Lands?

Growing up, I read like a fiend, but the books that were dearest to my heart were Laura Ingalls Wilder’s ‘Little House on the Prairie’ series. It sparked a fascination with the idea of ordinary, working class people adapting to new situations and new environments, in an effort to call somewhere home. So Little Bird’s emigration to America is a small homage to these books – which still have pride of place on the shelves in my back bedroom office!

Thanks Tom for the wonderful questions and Karen for your thoughtful answers! You can follow Tom Brassington on Twitter here! @brassoteach

PrevPreviousAccessible, engaging and unique: A review of The Reading Realm iPad app
NextThe Importance of Daily Storytime: An interview with Ross MontgomeryNext