Gaspard the Fox: An interview with Zeb Soanes

Gaspard the Fox: An interview with Zeb Soanes

Zeb Soanes is a familiar voice on BBC Radio and Television. He reads The Shipping Forecast and is a presenter for the BBC Proms. Here he talks about his new book, illustrated by James Mayhew, Gaspard the Fox…

Without giving too much away, can you tell us a bit more about Gaspard the Fox and what inspired this story?

A real little fox started visiting me in my London street almost every day.  It was the most handsome fox I had ever seen.  It even knew the sound of my bicycle and would often appear silently next to me as I folded it up.  I posted photos of the fox online and it gathered thousands of followers all over the word.  Friends suggested I write a story about its adventures and, one day, on a long train journey, I started writing Gaspard the Fox.

What made you decide on the French name Gaspard?

My French partner had always wanted to call a dog Gaspard – which, apparently, is quite an ordinary name in France and I’ve always believed in giving animals very solid human names, hence ‘Peter the Cat’.  I liked the name Gaspard because it forms the title of a beautiful piece of piano music by Ravel called Gaspard de la Nuit (Gaspard of the Night) which suited the fox’s nightly visits.  I later discovered that British foxes have quite a bit of French DNA as we over-hunted them hundreds of years ago and had to import some from France to boost numbers – so, I’ve a back story for Gaspard’s French origins that we’ll get into in a later story.

What is it like seeing your story illustrated with such beautiful, warm artwork by James Mayhew? What was your working relationship like? What do you think James’s illustrations add to the story?

James and I talked about the books and illustrators we loved as children such as Edward Ardizzone and Edward Bawden and we wanted to create a familiar almost nostalgic feel but I very much wanted it to look like today’s London.  It was unusual for James to illustrate a book set in a real, rather than an imagined location, so I walked him all around the places you see in the book and he met the real Gaspard. We were in touch regularly and it was so exciting to see his first sketches, as they appeared on the page almost exactly as I had imagined Gaspard’s world in my head.  It is the most collaborative working relationship and, in the spirit of the story, we have become very good friends.  I wrote far too much initially and learned that the wonderful thing about a picture book is that you can allow the illustrations to replace a lot of descriptive writing; you don’t need to describe the colour of a door, for example – but there is also a magic place where the words can suggest and the pictures complete an idea or a feeling: a story in the space between the words.

The story is full of humour and warmth, but I wondered if you might be trying to say something about our treatment of animals, wildlife and nature too? What do you hope readers take from the story?

It’s a story about friendship and being accepted for who you are.  Gaspard makes two new friends: Peter the Cat, who has cultivated his own unique identity and a dog named Finty that, instead of chasing Gaspard away (as you’d expect), thinks it’s brilliant to have a fox as her friend.  Not everyone thinks Foxes are welcome in the city, so there are kind and unkind humans in the book and I hope children will see how wonderful and exciting it is to share the urban environment with all living creatures.  Gaspard is undoubtedly a handsome fox, in life as in the story but there is a prominent tear through one ear.  Gaspard isn’t perfect and that’s an important message too.

I think this is one of my favourite double page spreads from the book. The use of colour is very interesting and suggests some sort of connection between the man and Gaspard. Can you give us some more information about what’s happening in this scene, what Gaspard might be thinking and feeling and what you, as the author, were trying to achieve?

James used a deliberately limited colour palate for his illustrations so there are lots of reds and oranges.  ‘The kind man on the bicycle’ cared for Gaspard when he was poorly, so Gaspard trusts him – inspired by my first encounter with the real Gaspard who had a bad leg.  I agree that his use of colour helps to suggest an emotional connection between the two characters.  I was reluctant, at first, to put a representation of my relationship with the real Gaspard in the book but it forms a link, for this first story at least, between the real fox that many people followed online and the storybook Gaspard and his animal friends.

I found the part of the story, where Gaspard is peering into his friend’s window, watching the two men laugh together, very uplifting. It’s lovely to have gay characters in a children’s story who ‘just are’ and whose relationship isn’t made into a big deal. How important was it to you to include this scene?

Thank you.  That was hugely important to me and to James.  The men could be flatmates but the written laughter suggests intimacy and James draws them touching – so it is the union of words and pictures that subtly suggests the warmth and depth of their relationship.  We wanted a completely matter of fact depiction of a happy gay couple – a positive image we felt was lacking in the cultural landscape of our childhoods where gay characters were nearly always outrageous outsiders.

I was saddened to read that there has been ‘a spate of attempts around the world to remove titles depicting gay or transgender characters from library shelves’ (The Guardian, January 2019). Why do you think children’s books that explore the lives of gay and transgender characters and present a variety of relationships are still so important?

“Nobody is born into this world with racist, ageist or homophobic beliefs, we learn them, so children’s books are the perfect place to instil early messages of kindness and humanity. “

I don’t like feeling I’m being preached at, so I hope the themes in the Gaspard books are almost homeopathic … just there, running throughout.

I know you grew up in Lowestoft, which was also a favourite place for my family to visit every year when we went on holiday to Norfolk. When you moved to London, did you feel like Gaspard at all – overwhelmed by the business and bustle?

Completely.  I remember getting off the train at Liverpool Street and looking down the platform to the concourse where it seemed everyone had been speeded up, they were all rushing everywhere so quickly.  I love Islington (the part of London where I live); it has a village feel with the canal, so it is easy to escape the rush of central London and live at a quieter pace when you want to.

How do you think your career in radio broadcasting has influenced your writing and this story?

Everything I write for the BBC is written to be read aloud on the radio and so, quite unconsciously, I think I selected words for this book that are pleasurable to say and many adults have said how much they enjoy reading it to children.  It is perhaps a bit challenging in places for a very young child to read for themselves; Peter the Cat, for example, uses quite sophisticated language – but I think that is a good thing and I’m grateful to my wonderful publisher, Graffeg, for allowing me ‘Lepidoptery’!  I learned a lot of vocabulary reading for myself when I was younger.  You feel empowered as a child with exactly the right word for something.

Are there any other children’s stories you would recommend that tackle similar themes as your story?

Charlotte’s Web comes instantly to mind from my childhood reading; where a spider saves a pig from being killed by weaving inspirational messages into her web above the pig-sty.  It’s a beautiful story.

Do you think Gaspard and his friends will return in a sequel? Do you think your childhood tortoise, Fred, might make an appearance?

Book Two will be published in August and I’m already working on a third.  Fred is yet to make an appearance, but you’ve just given me an idea 😉

Finally, can you describe Gaspard the Fox in three words? 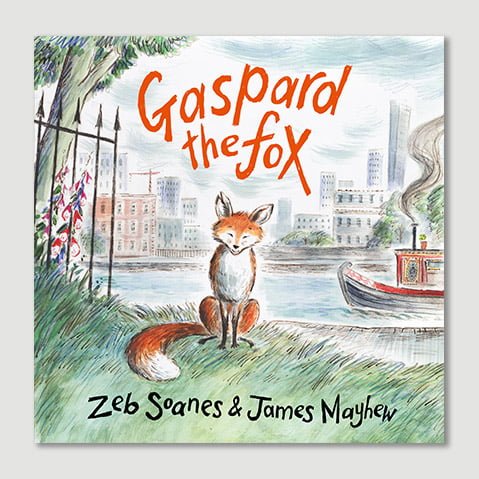