The Unmapped Chronicles: An interview with Abi Elphinstone

The Unmapped Chronicles: An interview with Abi Elphinstone

Without giving too much away, can you tell us a bit about your new book Everdark?

Each book in my new series, The Unmapped Chronicles, is a stand-alone adventure, kicking off with Everdark this month, which is a £1 World Book Day book. Everdark is the story of an overlooked and largely forgettable girl called Smudge (who longs to be noticed) and a grumpy monkey called Bartholomew (who longs to retire). Together, they set sail in a magical dhow boat to cross the treacherous Northswirl and put an end to Morg, an evil harpy who has risen from the forests of Everdark with the sole aim of stealing all the unmapped magic for herself. This is a story about silver whales and trap doors, sea witches and secret maps, but it is also a story about unlikely heroes and unexpected friends. Because sometimes it takes a story to show that the truly extraordinary people in this world – the ones who defeat monsters and save kingdoms – are, very often, the ones that nobody notices at first…

Sky Song and The Dreamsnatcher trilogy are much-loved books and adored by many children. How will your new series The Unmapped Chronicles be similar?

In all my books there is wildness. I grew up at the foot of a glen in Scotland where weekends were spent scrambling over the moors and building dens in the woods and I think, first and foremost, I am a writer because the wilderness I encountered as a child made me one. My previous books adopted wild settings, as do each of the stories in The Unmapped Chronicles, from the sprawling sky kingdom of Rumblestar to the roaring oceans of Crackledawn. And though in every book I write my plots and characters vary, the core values I champion remain the same: courage, hope and kindness.

How will The Unmapped Chronicles be different to your previous stories?

The Unmapped Chronicles is, perhaps, more humorous – and more magical – than my previous books. I adored Road Dahl’s The BFG – his (literally) larger than life characters and his playful language – and in both Everdark and Rumblestar (the first full-length book in the series which publishes in May this year) I had a lot of fun inventing my own words (from stormgulper to wigglyspat) and magical creatures (from a giant called Slumbergrot to a drizzle hag named Gertie Swamp). And whilst Everdark is set solely in the Unmapped Kingdoms, the other books in this series involve characters from our world finding a way through to these secret kingdoms. No scene in literature has proved more magical for me than when Lucy Pevensie pushed open that wardrobe door into Narnia and so I relished the chance to write my own world-crossing moment.

How do you go about creating these magical, wonderful worlds?

A mix of adventures – both close to home and far away – and accidental daydreams. For Sky Song, I was lucky enough to travel up to the Arctic and to Mongolia to research dog-sledding and eagle huntresses but I started writing The Unmapped Chronicles soon after I’d had a baby so much of my world-building happened inside my writing shed at home. I thought back to all the incredible skies I’d seen on my adventures – pink sunrises, orange sunsets, rain that made waterfalls roar and conjured rainbows and snow that made jewellery out of spiderwebs – and I started thinking. What if all the grown-ups have got it all wrong about our skies? What if it isn’t science and geography behind the weather up there but magic? What if there are four secret kingdoms – Rumblestar, Crackledawn, Jungledrop and Silvercrag – filled with fantastical creatures who conjure weather for our world? Perhaps drizzle hags brew rain and snow trolls beaver away with moon syrup and cloud wisp to make snow… And so the idea of the magical kingdoms in this series came about.

Do you draw the settings for your books initially?

Yes. I’m dyslexic so I find I need visual prompts to anchor my ideas in place. I sketch everything from whole kingdoms to the interiors of castle towers. Almost every scene I write is drawn before it’s written.

Are they inspired by places you’ve visited or seen?

Some of the places in The Unmapped Chronicles are inspired by places I’ve visited: the caves on Wildhorn island in Everdark were inspired by my travels in Bonito in Brazil, where I abseiled 80 metres into a cave called Abismo Anhumas in the jungle to find an underground lake at the bottom. Some of my fictional settings are inspired by places I’d love to visit: the optical illusion under-the-sea waterfall in Mauritius is the inspiration behind Endless Falls in Everdark. But often the locations in my books are simply invented: like the sky kingdom of Rumblestar, complete with a river called The Witch’s Fingers and the forever-snowy woods of Shiverbark forest.

What does a day in the life of Abi Elphinstone look like when you’re writing?

I have a baby at home now so if don’t have childcare I write (frantically!) in his lunch nap and when he’s gone to bed in the evenings. If it’s a day where I’m lucky enough to have childcare fixed up, I write from 8am until 6pm (with a twenty minute break for lunch). It’s pretty intense but when you’re a mother you have to seize every moment you can to write…

What books do you think have been most influential to you throughout your writing career?

Michelle Paver taught me how to write atmospheric scenes. Her Chronicles of Ancient Darkness remain some of my favourite books. I admire Katherine Rundell and Hilary McKay so much for their effortlessly beautiful prose. Ross Montgomery writes humour brilliantly so I’m always learning from him, and I think Piers Torday, Lauren St John and Emma Carroll shape stories perfectly, so I glean a lot about structure and pacing from them. In terms of earlier literary influences: CS Lewis, Philip Pullman, JK Rowling, Roald Dahl and Jill Murphy.

What advice would you give to teachers about how to develop reading for pleasure in their classrooms and schools?

Know that every child has a unique imagination so having a varied selection of books for them to choose from is key. Applaud any kind of reading – from scanning the back of cereal packets to devouring the latest bestsellers – because all a ‘reader for life’ needs at the start of their journey is encouragement. And lead by example: if a child sees a grown-up reading, he or she will see the value, and learn the power, of books.

Why do you think World Book Day is so important?

My teachers taught me about Pythagoras’ Theorem, William the Conqueror and all sorts of important things like that. But I learnt about courage, friendship, wonder and hope from the books I discovered growing up. Lyra Belacqua from Northern Lights showed me that girls can be just as brave as boys, adults and even armoured polar bears. Mildred Hubble from The Worst Witch helped me navigate friendships. Lucy Pevensie from The Lion, The Witch and the Wardrobe taught me to believe in worlds behind wardrobes and once in Narnia, Aslan showed me how to hope, even in the darkest times. So, although my teachers taught me, books brought me up and having a charity as dynamic and influential as World Book Day means that children from all backgrounds have the chance to enjoy the transformative effect of stories.

Can you think of another children’s book, besides your own, that you’ve enjoyed and would recommend?

Finally, can you describe your new book ‘Everdark’ in three words? 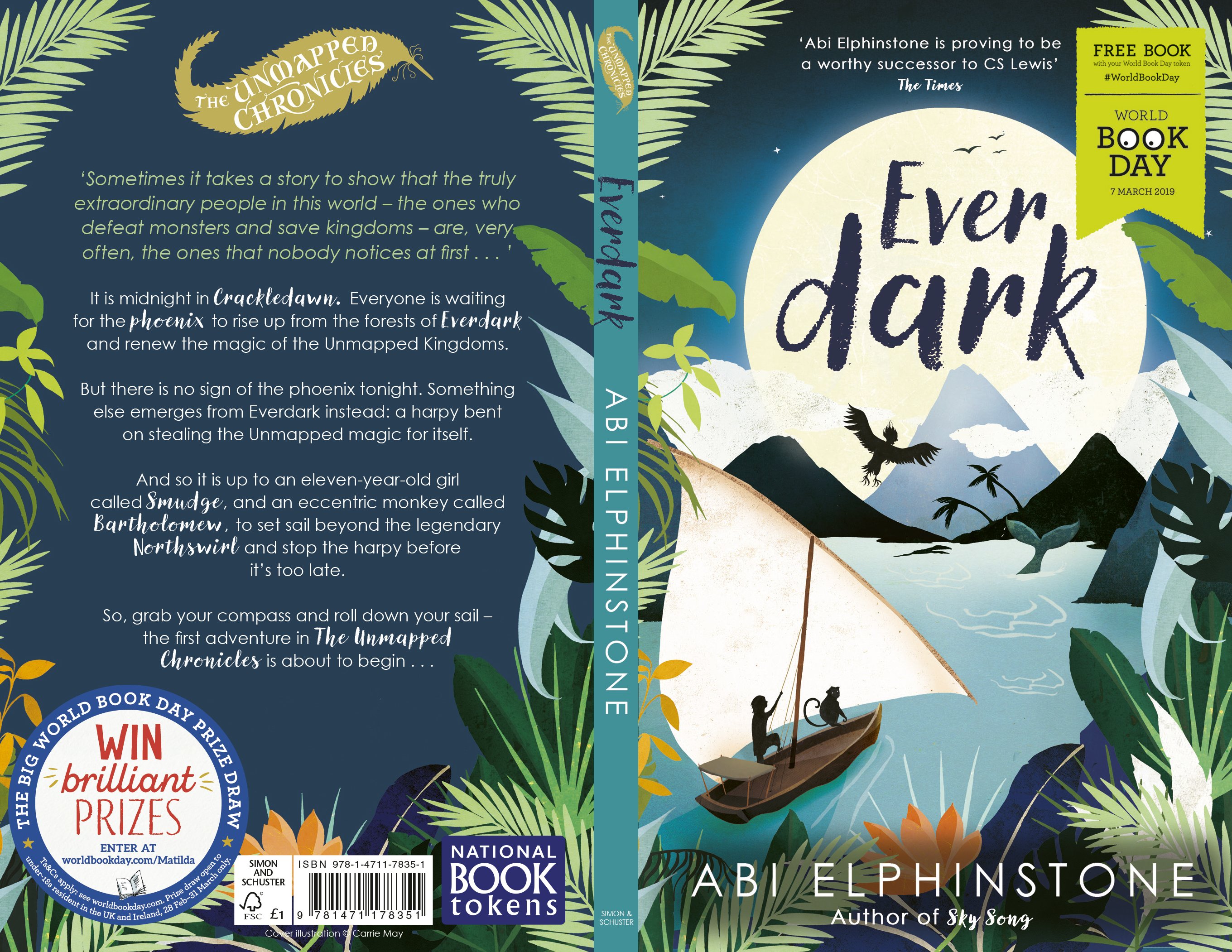 A huge ‘Thank you’ to Abi for answering all my questions so meticulously and passionately and for giving us a glimpse into her wonderful, magical worlds.

Abi Elphinstone grew up in Scotland where she spent most of her childhood building dens, hiding in tree houses and running wild across highland glens. After being coaxed out of her tree house, she studied English at Bristol University and then worked as a teacher in Africa, Berkshire and London. She is the author of the bestselling children’s books Sky Song and The Dreamsnatcher trilogy. Her new series of standalone adventure books, The Unmapped Chronicles, begins with Everdark, which launches as a £1 World Book Day book this Spring, then continues with Rumblestar in May. When she’s not writing, Abi volunteers for Beanstalk charity, speaks in schools and travels the world looking for her next story. Her latest adventure involved living with the Kazakh Eagle Hunters in Mongolia and you can read about that here.