An interview with A.F. Harrold, author of The Afterwards and The Imaginary

An interview with A.F. Harrold, author of The Afterwards and The Imaginary

A.F. Harrold is a poet, performer and children’s author. His work for children includes The Song From Somewhere Else, The Imaginary, The Afterwards and Things You Find in a Poet’s Beard.

Without giving too much away, can you tell us a bit about your new book ‘The Afterwards’?

The Afterwards is about a girl called December and her best friend, Happiness. One of them has a dreadful accident and dies, right near the beginning of the book. Her friend finds a way into the afterworld and tries to bring her back to the land of the living.

What is it like working alongside the talented Emily Gravett? How does the process work? What do you feel Emily’s illustrations particularly bring to the story?

It’s wonderful having Emily on board, for both this book and The Imaginary. She lends such a vision, such a style, imparts such a sense of her own fingerprints all over the book (from the endpapers to the illustrations to the little cats that separate scenes in place of asterisks). The process for these two books has been simple: I wrote a story and (my publishers) handed it to Emily, and she did her magic. Sometimes her magic made me go back and change bits of the text to match the images, so there was a little to and fro, but basically it’s: story, then illustration.

How important are the names in the story? How do you go about creating names?

It’s one of the universal truths of books that, generally, characters need names (if there was only one girl and one boy in the book you could call them the Girl and the Boy, as Kenneth Graeme manages to do with the Toad and the Badger, but I had more characters than that). December was called December because there was a diary on my desk I flicked through when I needed to name her. Happiness, I think, just popped onto the page from nowhere, or maybe a subconscious reaction to the fact it wasn’t going to be a happy story? Ms Todd is just a Death-ish sort of name without being too death-ish… In The Imaginary Mr Bunting got called Mr Bunting when I glanced at the poetry books on my shelves looking for a name and alighted on Basil Bunting’s slim Collected Poems (and Wystan from the Fizzlebert Stump was named in the same way, but from W.H. Auden’s fat Collected Poems),

I wondered if the idea of a grey, strange afterlife in the book had been influenced at all by Greek mythology and their ideas about the afterlife and if Ms Todd was perhaps a version of Hades?

I don’t know who or what Ms Todd is. She certainly seems to have some role in that grey place, and she certainly has powers, but beyond that I would be cautious about suggesting any name beyond Ms Todd. The afterworld isn’t influenced, consciously, by Greek mythology, although there may be something Lethean about it. I do know, the black sun in the sky comes directly from the 1980s 2000AD comic strip by Grant Morrison and Steve Yeowell, Zenith. The ‘hanging on as long as you remember yourself’ aspect might come partly from what happens after Terry Pratchett’s Death enters your life, there’s just that fading away… but that also appears in The Imaginary when Rudger is no longer remembered, except that’s obviously not the case (generally) with the dead – think of the Brian Patten poem So Many Different Lengths of Time. And if you read Dr Seuess’s Oh, The Places You’ll Go, there’s that depressing passage in there about ‘The Waiting Place’, which makes me think of the Halls of Mandos in Tolkien’s mythology… so many echoes, so many afterworlds.

I thought your depiction of the afterlife was quite frightening and dark, in places. Children’s stories sometime sanitise death and present it in a cosy, warm, comforting manner. Would you agree with this? Why did you decide to create such a foreboding, empty setting?

I’m not sure I have an opinion on what children’s stories sometimes do, because, probably, sometimes they do and sometimes they don’t. I think you’re right, my afterworld isn’t a comforting, happy place, so the message to take from that is: don’t die, it’s better to be alive. I didn’t set out to create a ‘foreboding, empty setting’, that’s just the place Happiness and December found through Uncle Graham’s garden gate. It just what happened. No decisions, on my part.

One of my favourite scenes in the story is in Chapter Ten, when Ember is trying to escape from Uncle Graham – such an exciting, tense moment! My heart was in my mouth! Do you have a favourite scene in the book or was there a chapter that you particularly enjoyed writing?

I don’t have a favourite scene. It’s such a short book it really feels pretty much of a whole to me. My favourite chapter to write has to be Chapter 20 – when you write a chapter like that and realise you can take the rest of the afternoon off, that’s lovely.

Some of the scenes involving Ember and her mother were quite upsetting to read. Were they difficult to write?

Oddly, none of the book was hard to write. It’s a book that was gifted and that never stopped unrolling (it never stopped surprising, either, but it never got stuck, and didn’t need a huge lot of jiggling to get into shape afterwards – that scene was the only one that needed some reshaping and rethinking, simply because it’s where so much happens, where so many characters are on stage at the same time… it needed to be simpler and flow better). I’m glad they’re upsetting to read, because that’s the heart and core of the book! If it passed you by with nary a flicker of emotion, then that would be a big failure on my part.

“He didn’t say much about her, but when he did, he smiled and looked at December and shook his head in a way that smelt of love…”

This is such an unusual image – can you talk a little bit more about this?

It’s just a turn of phrase for the reader to ponder.

I loved the description in the book about Penny’s cooking and the hot dogs being ‘swaddled’ in ‘soft white buns’. Do you have a favourite food and why is it your favourite?

Those hot dogs sound tasty. I like fajitas, twiglets, chocolate, roast potatoes… lots of things, and I couldn’t tell you why, other than: they’re tasty. I’m not nostalgic or sentimental about food.

At the end of the story, the cat says to Ember, “Go home. People are waiting for you. Your supper’s waiting and it’s still hot. Run, now.” I was immediately reminded of the wonderful ‘Where the Wild Things Are’ by Maurice Sendak and was wondering if this was a book you read as a child? Are there any other parallels between ‘Where the Wild Things Are’ (or indeed, any other children’s stories) and ‘The Afterwards’?

The other direct Where the Wild Things Are reference is the tree that’s growing from Amanda’s bed in The Imaginary, and when I got the finished copy of that book for the first time I discovered a picture of Emily’s I’d not seen before, opposite the Christina Rossetti poem, where Amanda and Rudger are dangling from a tree, which just sent me spinning back to the Wild Rumpus… That was what, if I hadn’t already known it, proved to me that Emily and I were on the same wavelength for telling these stories.

How does your work as a poet and love of poetry influence your story writing? How is writing a story similar to writing a poem? How is it different? Do you have a preference for one form of writing?

I think poetry is a good training ground for children’s literature – both forms are about getting as many words and extraneous waffle out of the way – get on with it, get down to the story.

What would you say the main themes in your books are?

That’s not for me to say, that’s for the readers.

Finally, can you describe ‘The Afterwards’ in three words? 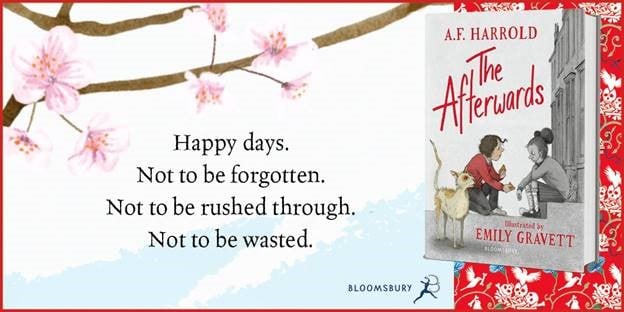 Thank you very much for answering my questions and offering an insight into your work! You can read more about A.F. Harrold’s reading journey here!